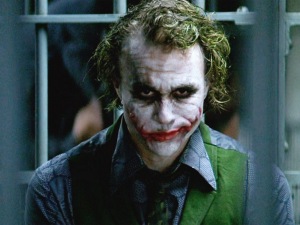 “You look nervous. Is it the scars?  You want to know how I got ‘em?  Come here.  Hey!  Look at me.  So I had a wife, beautiful, like you, who tells me I worry too much.  Who tells me I ought to smile more.  Who gambles and gets in deep with the sharks… look at me!  One day, they carve her face.  And we have no money for surgeries.  She can’t take it.  I just want to see her smile again, hmm?  I just want her to know that I don’t care about the scars.  So… I stick a razor in my mouth and do this… to myself.  And you know what?  She can’t stand the sight of me!  She leaves.  Now I see the funny side.  Now I’m always smiling!” – Heath Ledger as the Joker

Thesis:  Heath Ledger became the Joker within his body and mind, and delivered one of the best antagonist portrayals of a villain this world has ever seen.  Turning Harvey Dent into a genuine believable lunatic,  becoming a truly deranged actor, and showing us a Joker we have never seen before is why Heath Ledger nailed this part so well, and why no one in the near future will ever top his performance.

The Believable Transformation of Harvey Dent:

When we are first introduced to Harvey Dent, we see a young and ambitious District Attorney, working diligently around the clock to put every bad guy in Gotham behind bars.  Word of this catches up to the Joker, and he doesn’t like the fact that Harvey is putting away all his clients.  The Joker is able to see past who Harvey Dent is, and knows that deep down inside he has a burning desire to be accepted by the public, something only the Joker could possibly use against him.  While Dent is trying with all his might to stay on the trail of the Joker, he begins to fall behind and fails miserably.  The transformation from district attorney to murdering lunatic can be easily defined in one scene of the movie.  While the Joker gets thrown in the local holding cells, he sets up a plan to rig both Harvey and his girlfriend into a warehouse filled with explosives.  The only catch is that Batman and the police only have time to save one, so naturally they go for Harvey.  When Harvey realizes that his girlfriend has been killed by the explosives set by the Joker, he gives into Heath’s madness and becomes a corrupt murdering machine, seeking revenge for his dead girlfriend.  All of these events seem so real and heart wrenching, and that is solely because of Heath’s amazing calm, cool, and collected performance when he corrupts Harvey’s performance.  It’s almost as if the Joker knew it was going to happen, and it made us truly believe that he had no other motive in Gotham other than to watch him become the man we see towards the end of the movie.  Without Heath, it could’ve very well just been a shift in the plot, and a way to bring Harvey Two-Face into the movie, but that is far from the truth.

Heath Ledger Turned Into the Joker On and Off the Set:

How many actors do you know that will literally lock themselves into a trailer and practice lines for hours?  Such dedication is rarely seen in films today, but Heath knew what it took to become a true villain.  Production crew members stated how he would go in there as if he was taking a nap, and come out hours later looking like a completely changed man.  This eventually lead to his successful portrayal as the Joker, and won him a posthumous Oscar.  I say posthumous because a couple months after the film was released,  Heath overdosed on a unknown drug, and killed himself.  While this was a definite shock to fans all around the world, this terrible tragedy truly shows the man that Heath became—A character so real that not even he could escape the madness of the Joker.  Friends and family stated that after shooting for the film was done, Heath was never himself again, and he often would go back to doing the things he did to become the Joker.  This lead to heavy drinking, depression, and eventual death.  This tragic and sad death shows the level of submersion Heath went to, and drives home the fact that there will never be another Joker like him.

A Joker We Have Never Seen:

Forget any Joker you have seen in the past, and focus on the character Heath brought us. Forget Batman, forget Harvey Dent, forget Gotham.  No villain has ever been played to such meticulous detail.  The line deliveries, facial tics, and true madness the Joker had are all because of Heath’s incredible performance.  Joker’s that Batman fans had seen in the past always treated crime as just a game, and wanted Batman to just play along.  Heath created a Joker that wanted to break Batman from within his soul, and while doing this, watch Gotham  slowly crumble into pieces.  Nobody has ever approached the character of Joker like that, and as a result it left us with a performance to be remembered and looked back on for generations to come.

Heath Ledger delivered the best portrayal of the Joker the world has ever seen, and gives us many reasons to believe why this is true.  Turing an innocent man into a criminal within the span of one movie, locking himself into trailers to fully submerse himself in the role, and giving us a Joker that the world has never seen is the reasons why I believe Heath Ledger will go down in history.  No actor has gone to such a level to become a certain role, and because of this it cost Heath his life, and shows what the Joker not only did to Batman, but Heath himself.  I believe that Heath’s performance will be looked upon for generations to come, and has set a new standard when it comes to super hero villains.  Heath Ledger became the Joker within his body and mind, and delivered one of the best antagonist portrayals of a villain this world has ever seen.  Turning Harvey Dent into a genuine believable lunatic,  becoming a truly deranged actor, and showing us a Joker we have never seen before is why Heath Ledger nailed this part so well, and why no one in the near future will ever top his performance.